Minister D.Ganbat meets with H.E. Ms. Elisabeth BARSACQ, Ambassador of the Republic of France to Mongolia 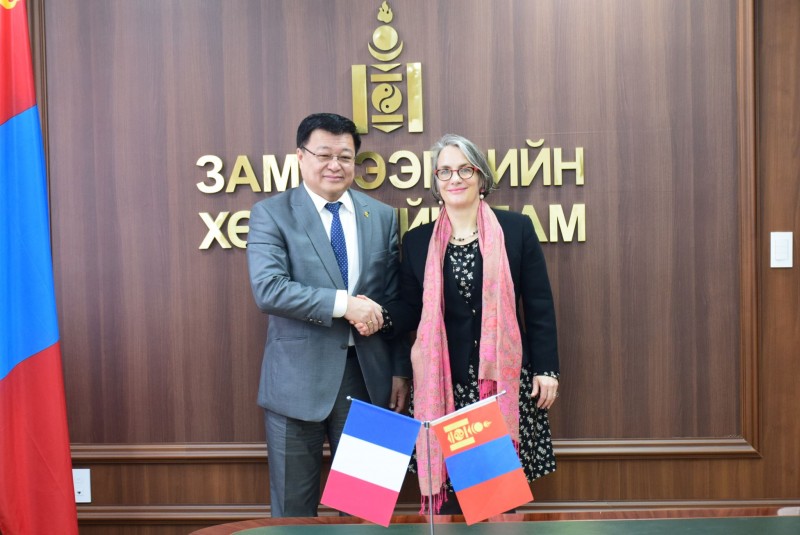 H.E. Mr. Ganbat Dangaa, Minister of Road and Transport of Mongolia met with H.E. Ms Elisabeth Barsacq, Ambassador of the Republic France to Mongolia on 26 January 2017.

During the meeting both sides expressed their satisfaction on the strong relationship covering all aspects of political and social fields and stressed the importance of economic cooperation to strengthen bilateral ties further.

Minister D.Ganbat informed about the existing solid foundation of cooperation between the two sides in the field of transport, mentioning longstanding exchange with leading French businesses and voiced the Ministry’s desire to work closely with France in the field of transport with added focus on transfer of advanced technologies from France and attracting more investments.

He also briefly introduced about the planned infrastructural projects to be implemented by the ministry in which exist good opportunities to engage for interested French companies and also mentioned about the government’s need for the technical cooperation and financial support from the French government and financial organizations.

Ambassador Ms. Barsacq expressed her readiness to support in promotion of bilateral cooperation in transport areas and also to work to attract French companies specializing in railway, cable transport, airport service and so on.