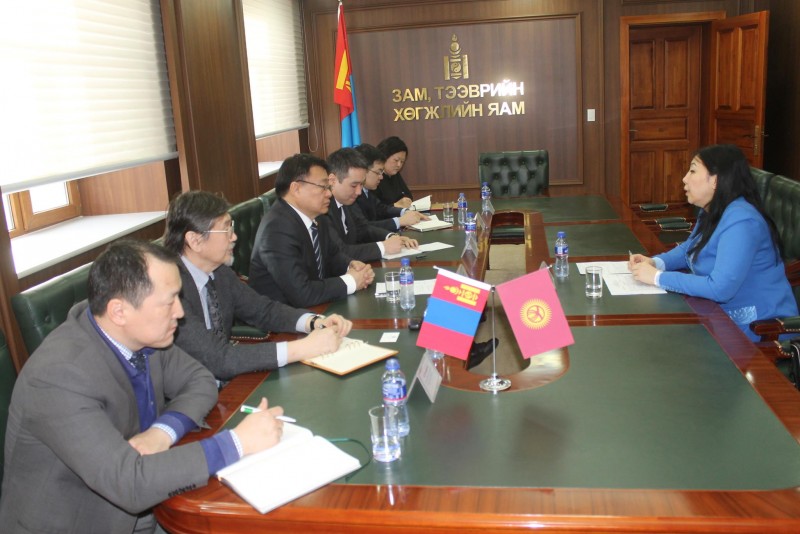 H.E. Mr. Ganbat Dangaa, Minister of Road and Transport of Mongolia met with H.E. Ms Kanaiym Baktygulova, Ambassador of the Kyrgyz Republic to Mongolia on 21 February 2017.

Minister D.Ganbat informed the Ambassador Ms.Baktygulova that he was appointed as the co-chair of the Mongol-Kyrgyz Inter-governmental Committee following the Cabinet reorganization after Parliamentary elections held in June 2016 and he expressed his satisfaction on the current progress of bilateral relationship especially in the areas of political and social exchange and collaboration. Though, he voiced his concern on the slow economic and trade relations between the two sides and conveyed his wish to exert more joint effort towards strengthening business and trade ties.

During the meeting the two sides also exchanged views concerning the activities of the inter-governmental committee and reached consensus to expedite implementation of the agreements reached during the last meeting and shared their position on the date of next meeting.

In the capacity of the Minister of Road and Transport Development, Mr. D.Ganbat also shared his views about possibilities of developing bilateral cooperation in the areas of transport, especially in the areas of mutual support at international arena to protect the rights of landlocked countries and ensuring their freedom of transit.