54TH CONFERENCE OF DIRECTOR GENERALS OF THE ASIA-PACIFIC CIVIL AVIATION WAS THE HELD IN ULAANBAATAR, MONGOLIA 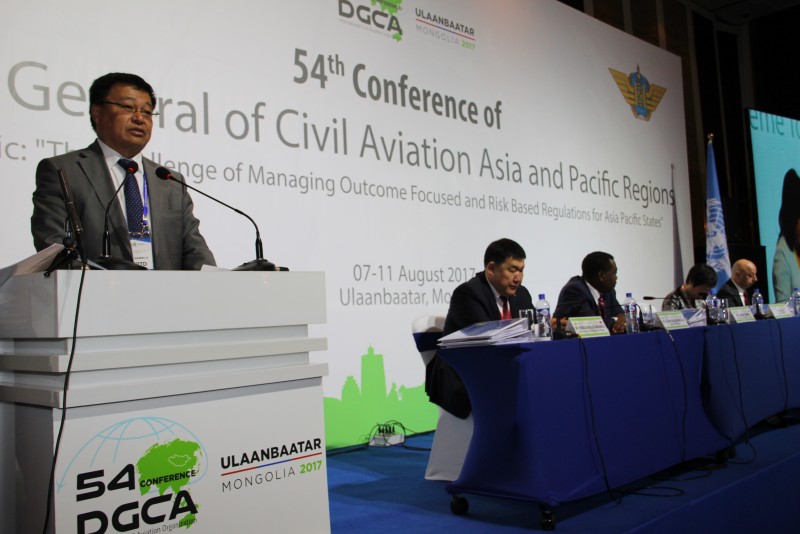 In 1989 Mongolia has become the member country of International civil aviation organization /ICAO/, specialized agency of the United Nations/UN/, and become one of the full-fledged 193 countries.

Mongolia has been actively taking part in all activities organized from the ICAO and signing in international conventions, legal and official documents and also has been cooperating on the accomplishing and policy making works of civil aviation safety and security, airport operation and air transport activity.

Also, Mongolia has been participating and organizing the activities such as international auditing, researching and training work, cooperation program from Air Transport Association, and certification work for foreign and domestic civil aviation organizations and training courses.

The 54th Conference of Director Generals of the Asia-Pacific Civil Aviation was held in Ulaanbaatar on 7th -11th August. The conference was attended by not only the regional representatives, but also the delegates representing the 10-12 international civil aviation organizations and delegates from American and European highly developed air transportation countries, and also manufacturers of aircraft and air navigation, safety and security equipment.

During the conference, Mr. Dangaa.Ganbat, the Minister of Road and Transport Development of Mongolia said: Our globe is one, our task is one. Due to the specifications of the countries, the problems and solutions are different, but we are working under the campaign “No country left behind”, which has arisen from prior conferences, so we are the compliment of the one complex system. Mongolia has the nearest airline to connect Asia and Europe, with the conversed and safe technology of air navigation system, will actively cooperate with all other countries. I am pleased to inform you all, that we will continue our effort to contribute to the civil aviation development in the Asia-Pacific region.

In 2012 ICAO proposed Mongolia as the hosting country of the 54th Conference of Director Generals of the Asia-Pacific Civil Aviation and decided it at the 52nd Session in 2015. At the 53rd Conference which was held in Sri Lanka in July 2016, the conference flag was officially transferred to Mongolia and the theme topic of the conference was set up.

The 54th DGCA Conference was held under the” The challenge of managing outcome focused and risk based regulations for Asia and the Pacific states” theme topic. The conference continued for 5 days and was attended by over 400 delegates from 40 countries and 12 civil aviation organizations.


By organizing this Conference Mongolia is expected to earn following benefits:

1. Raise the international recognition of Mongolia

3. Extend the range of the cooperation between Asia and the Pacific region countries

4. Enhance the opportunity to cooperate with the international civil aviation organizations