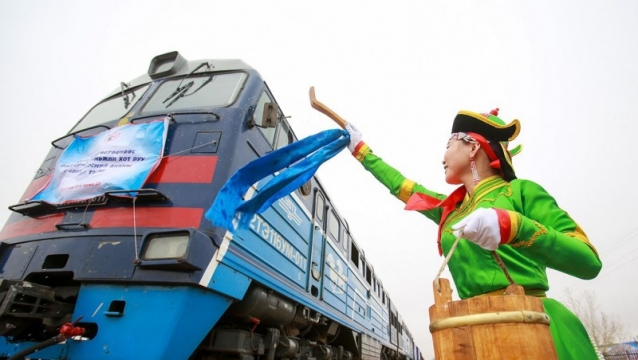 “The expansion of Olon Ovoot inland port will help increase income from coal and employment in Mongolia”, remarked D.Ganbat, Minister of Road and Transport Development D.Ganbat as he attended an official inauguration ceremony of an expanded terminal built at Olon Ovoot port, Dornogobi aimag on March 23.

Mongolia had begun testing rail transport of coal from the Olon Ovoot inland port to Chinese Tianjin port, the closest sea port of the People’s Republic of China to Mongolia.In response to increased coal demand from China, Ulaanbaatar Railway Joint Venture in cooperation with the Ministry of Road and Transport Development expanded the Olon Ovoot port by building the first unit of its terminal within 20 days, making possible the transport of 100-150 wagon coal which would increase Mongolia’s coal export to its southern neighbor by 200 thousand tons a month and 2.5 million tons a year.

The terminal’s construction was co-realized with private sectors from November 6 to December 21, 2016, using MNT 1.4 billion investment. More than 20 thousand tons of cargo has been transported in 2017 since its construction.

The second rail line will be constructed from April to June this year, and when in full operation, the Olon Ovoot terminal will be capable of transporting 300-wagon or 19,500 tons of cargo. The Olon Ovoot port of Dornogobi aimag was set up in 1974.

Those present at the inauguration ceremony included Yang Qingdong, Charge d’affaires at the Chinese Embassy in Mongolia and D.Jigjidnyamaa, Director of Ulaanbaatar Railway Joint Venture.