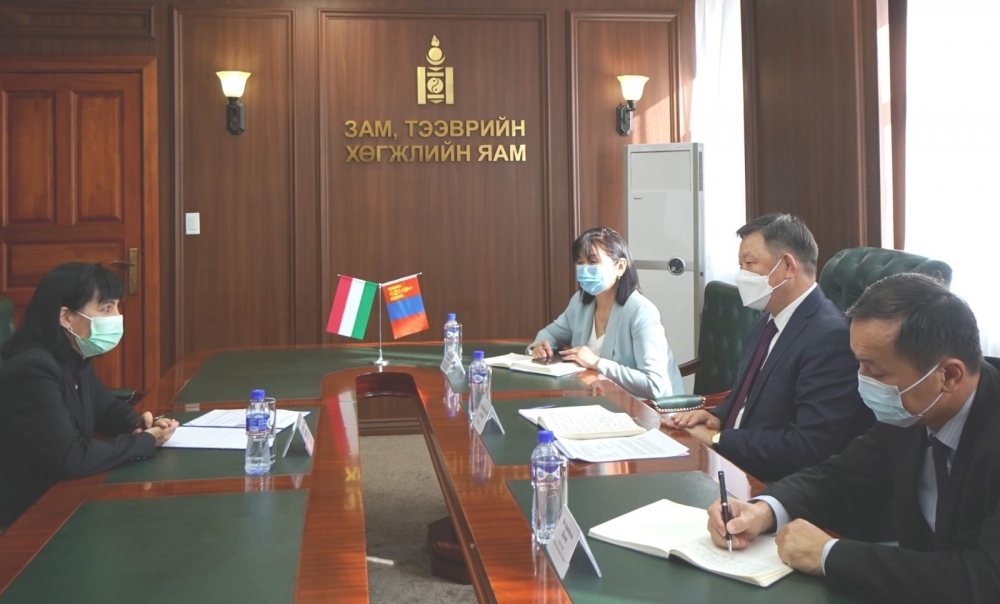 During the meeting, the sides mainly exchanged views on bilateral air transport connectivity matters. Ambassador Obrusánszky informed that direct flights between the two countries have been successfully performed by Mongolian Hunnu Air company and operated two direct flights to Hungary so far. She further briefed that Hunnu Air and Hungarian Wizz Air company have been in negotiation to open a joint new route between Budapest-Nursultan-Ulaanbaatar and reached initial agreement.

“Wizz Air”, a low-cost air carrier, operates a Budapest-Nursultan flight, while Hunnu Air is designated to fly Nursultan-Ulaanbaatar route. She also emphasized that many Mongolian nationals are living in Hungary as well as in Eastern and Central Europe, so Budapest can be convenient and cheaper for them to fly between Mongolia and Europe and also can be greatly beneficial for business travelers and tourists.

Minister L.Khaltar mentioned about the Government Resolution No. 162 of 16 June 2021 that Cabinet approved a resolution on air transport and tourism-related measures for prompt recovery of air travel and tourism industry in order to meet the needs of the tourism market, and improve coherence between air transport and tourism sector. The resolution also provides for opening new flight routes based on tourist arrivals and market demand and to help the airlines’ increase their capacity. He expressed his full support for the cooperation between the two companies because as it is correlates with the objectives of the resolution.

In this context, the both parties agreed to activate the negotiation works for the signing of the Air Services Agreement between the Government of Mongolia and the Government of Hungary, which is an important document for the expansion and development of air transport relations between the two countries.

They also agreed to explore other cooperation opportunities such as establishing a railway history museum in Mongolia and strengthening ties between railway companies, study possibilities of supplying railway equipment for repair and maintenance work.