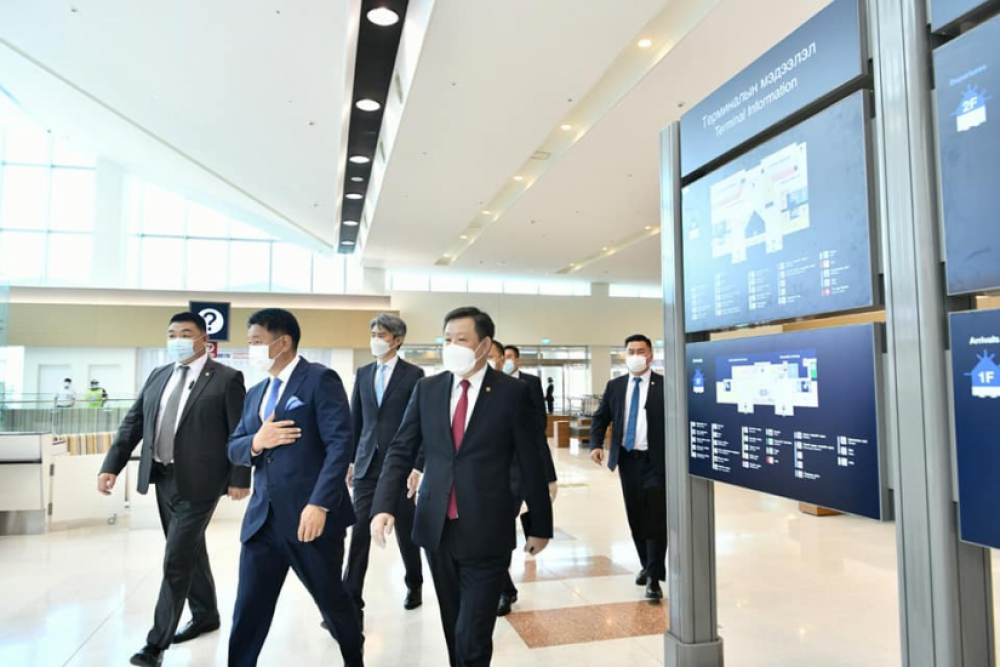 The opening ceremony of the new Chinggis Khaan International Airport was held on July 4, 2021.

The ceremony was attended by the President of Mongolia, relevant Cabinet ministers, Japanese embassy officials and guests.

The President Ukhnaa Khurelsukh and Ambassador Kobayashi Hiroyuki jointly unveiled the Mongolian-Japanese friendship memorial complex located in the passenger hall of the airport.

During his speech, the President expressed his great pleasure to participating in this memorable event, the opening and launching its first flight from New International Airport, which is a symbol of Mongolia-Japan friendship and partnership and one of the major development projects in the country that connects the landlocked Mongolia to the world.

He recalled that during his official visit to Japan in 2018 by the invitation of the Prime Minister of Japan, the two sides exchanged views on the development of bilateral strategic partnership, including the significance of opening the new airport and its management and agreed to make efforts to this end.

Due to the COVID-19 pandemic, the opening of the new airport has been delayed, but today happens the historic moment of opening and departing the first flight from Ulaanbaatar to Tokyo, he further stated.

The President congratulated and expressed his gratitude all the officials from the government and private sector, business companies, management team, engineers and technicians for their valuable cooperation in the construction of the airport named after the Great Chinggis Khan.

Ambassador of Japan conveyed a congratulatory message from the Prime Minister of Japan, Mr. Suga Yoshihide, sent on the occasion of the opening of the new airport.

Mr. Kato Takeo, CEO of New Ulaanbaatar International Airport LLC Mongolian-Japanese joint venture company which will be handling the management of new airport for the next 15 years, officially announced the opening of the new international airport.

With the commissioning of the new airport, the old airport, Buyant-Ukhaa, will be used for general aviation development, training, repair and maintenance purposes as well as for special, emergency and humanitarian flights. All international and domestic commercial flights will be operated through the new Chinggis Khaan New International Airport at Khushig Valley.